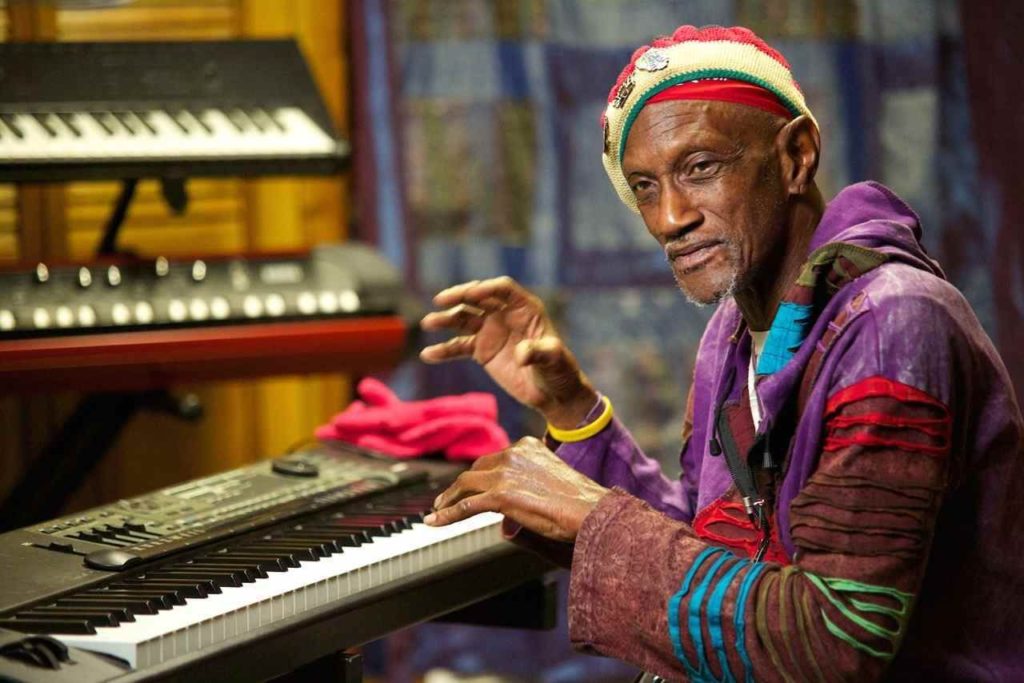 ~ A special message from a good friend and brother ~

The following is a special montage of Bernie's music put together by a dear family friend. Enjoy.

Scarlett Lee Moore from Princeton, NJ wrote on June 25, 2021
Bernie was my hero. An innovative musician, scholar, gentle human being and a friend to other musicians. God bless Judie and May he rest in peace. I’ll forever be grateful for you coming to my shows and sitting in Bernie. Thank you for the music and Love you forever!!💋🙏🏾❤️
Scarlett Lee Moore

IONEYE from Providence wrote on June 25, 2021
Everyday I am further inspired by the sounds and smiles that Bernie left us. He was a true pioneer, genius and seemed like a sweetheart. Thank you again Woo master!!!

Peter mcdonnell from London England wrote on June 25, 2021
I was lucky to meet Bernie in the 1980,s while he was touring in Japan with some mutual friends and from then on it was a long lasting friendship.
Judie,Bernie and Bassel invited me to stay with them in Plainfield and Judie and Bernie stayed with me in Tokyo.
He guided my son when he was learning the drums and my son Michael got to Jam with Bernie in Tokyo when he was only 13 years old and something he still talks about today..Bernie was not only a Musician but had a beautiful heart and Soul and think about him all the time..Until we meet again my friend X

Edward Garcia from Gilroy wrote on June 24, 2021
There will never be a funkier man on the keys. Long live the Woo! Thank you for the incredible music.

James R. Branch from Plainfield, New Jersey wrote on January 16, 2018
Having the pleasure of growing up in Plainfield and as a youth following the works of Bernie, Bootsy, Funkadelic and Parliament. Hanging out at Steve's Record shop getting the latest and greatest of the P funk activities was very educational. We had our P funk study sessions almost on a daily bases. Certain things can not be said here. But the gifts Bernie and Funkadelic gave us will always hold a special place in our hearts as the music helped shape challenges we all had to face. Thank you Dr. Worrell.

Dean Ryckman from Albuquerque wrote on December 7, 2017
Bernie was such a visionary, Elevation: the upper air, and Funk of Ages are absolutely essential records in the course of my musical development, and life in general. Love you BERNIE! words will never express my gratitude for your genius of Sound! Respect , your groove is immortal!

Von Lawson wrote on November 4, 2017
Thank you Dr. Worrell for all the great music and memories that you gave to me and so many of my generation during the P-Funk movement. I learned a great love for rock, funk, soul, jazz and every other genre of music, because your work helped to open my mind and spirit to the gift you so generously gave. You will be missed, but I listen to your music, forever.

Marcus Mosley from Morada wrote on November 2, 2017
What a personal Joy to have met You ... Dr. G. Bernie Worrell, I've witness truly God on : Keyboards ( D6-Clav, Moog Snyth, B3 Organ)... Bernie, eternally Your Spirit will Live, every time we hear You ... for the Victory is Yours... Thank You for sharing your events from Universe ... in our Time and Space... Love You Brother ...!

Curnel Ayers from Denver wrote on October 28, 2017
Thank you.

Webster wrote on October 8, 2017
Bernie was a legend to us in the Music World. God bless you Bernie and thank you for sharing your spirit with us.

Paul f moore from Whitehouse nj wrote on September 13, 2017
You are and always will be my friend. Miss you buddy. My family sends love❤️

Ken S. from Wilmington,NC wrote on August 18, 2017
Thanks for the memories; thanks for THA FUNK!

J celica from New bedford ma wrote on August 5, 2017
May you play on in heaven as you did on earth

Anthony Brown from LAWRENCEVILLE wrote on July 19, 2017
I'm glad you got a little light under the sun!

Diane from Erie wrote on June 8, 2017
What an honor it was to have met you and to have had the chance to talk to you when you played a show at our club in Erie PA on Valentine's Day several years ago. I still remember our conversation and what a kind and loving person you were. I was a fan of Parliament as a teenager(and to this day)...one of my very first albums. You were happy to sign my albums and pose for a picture. Thank you for the music and the memories. Peace and Love.

DIVINE POWER from COLUMBUS wrote on May 31, 2017
I've spent many days and nights studying you. Whenever I speak of Pfunk, I mention you. Thank you for all the love you gave. Peace

Kara V from Hampton wrote on May 31, 2017
Bernie, you will forever be one of the most special people I was blessed to have in my life. From the time I was a little girl, sitting at your keybord singing 'the sun will come out tomorrow', to having drinks with you at the bar and then the day you met my newborn son, I love you and miss you dearly. Fly high my friend.

Ms Jocelyn wrote on April 26, 2017
My daughter and I sat with you at breakfast in Bellingham last month...finally got to your site. It's a lovely tribute, Judie.