I’ve been looking for this for at least two years.  Today, I was cataloging and storing Bernie’s “stuff” and a large envelope fell and spilled some of what was in it.  When Bassl (our son) went to pick it up, the bankruptcy papers were on top (thank you, Bernie LOL). 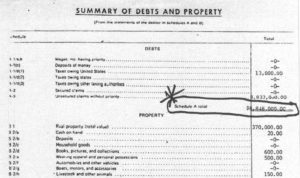 So, as George says the “bankruptcy is fictitious”,
let’s show that to be the lie it is.

BACK HISTORY:  Bernie was a co-founding member of ORIGINAL Parliament-Funkadelic (P-Funk). The original Parliament (Ray, Fuzzy, Calvin, Grady and george) and original Funkadelic (Bernie, Billy, Eddie, Tal and Tiki) were part of THANG, INC.   This was the corporation set up in order that these ten people would share EQUALLY in Artist Royalties.

Without going into the entire history, payment of Artist Royalties was set (as a precedent) when george paid Bernie SOME of his Artist Royalties and Bernie (along with everyone else) “received” a rental car (george had an “in” with some car dealer and “made a great deal”, he said).  Those cars were all repossessed within six months (if I remember the timeline correctly).

To the best of my knowledge, that was the only time the other original members received Artist Royalties.  george has kept all.  AND *this* is what sets george’s grand theft and fraud apart from the usual shenanigans in the Music Industry.  They were*all* members of the corporation (which george then dissolved secretly after his bankruptcy).

The question now is:  Does George still receive all Artist Royalties?  And if so, why aren’t the original nine being paid?  So, this is ongoing and THAT is another reason I am doing this.  george is NOT going to get away with his version of history!!!!

Why am I posting the bankruptcy papers?  Because george told a reporter (see “WOOniversal Truths by Bernie & Judie Worrell“) that “the bankruptcy was a farce”.  I promised to post it once I found it so everyone could see for themselves that this is just one more lie from george clinton.  You can judge for yourselves.

THIS answers the question “Where did everyone’s publishing go?”  I don’t have the time nor the inclination to go into all of this again.  Go read if you are interested as this was the ONLY time Bernie sat down and talked about it.  For years, he just hoped george would do the right thing. By now, everyone knows what george did.  I’m done!!!

I promised to post the bankruptcy papers when I found them and here they are: